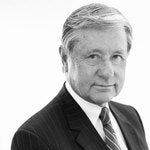 Duane, Hauck, Davis, Gravatt & Campbell, P.C. proudly remembers and mourns the passing of Harley W. Duane, III, a namesake and founding member of the firm and respected friend and colleague.

Harley W. Duane, III, was a graduate of the Virginia Military Institute (1967) and the Washington & Lee School of Law (1970).  Harley began his legal career with the firm of May, Garrett, & Miller where he became a partner in 1975 and continued to practice until the formation of Duane and Shannon in 1984.  As a founding member of Duane, Hauck, Davis, Gravatt, and Campbell, P.C., Harley concentrated his practice in civil litigation with a focus on premises liability, personal injury, and insurance coverage matters.

Harley was a member of St. Stephen's Episcopal Church in Richmond since 1950 and an active member of The Country Club of Virginia, where he served as President from 2013 to 2014.

An avid golfer, Harley won the CCV "12 and Under" championship in 1957, and the CCV Seniors' Tournament in 1998, amongst other achievements. He was known to be especially long off the tee. He was a member of both the Blue Chips Golf Group, and The Captains. Harley served on the Board of the Richmond Golf Association for over thirty-five years, and was the President of the RGA from 1983 to 1984.

A tremendous competitor and athlete, Harley played NCAA golf, basketball and baseball at VMI, and engaged in many sports throughout his lifetime.

Harley was appointed by the 63rd Governor of Virginia, John Dalton, as a member of the "Commission for the Status of Women in Virginia" to help promote and facilitate equality for, and the interests of, women in the Commonwealth.  He was also a longstanding volunteer and contributor to the Special Olympics of Virginia.

Harley was always quick to downplay personal achievement and accomplishments, instead putting his family and friends first, and giving constant encouragement and support to those around him. He was unwaveringly devout in his faith, which acted as his moral compass, and made him someone to whom others looked to for guidance and advice. Defending and advocating for those less-fortunate was a part of Harley's daily life and a mindset that he ensured was passed down to his children. A razor-sharp wit and gregarious personality made him especially humorous, and Harley was constantly the life of any party.

Harley touched and improved the lives of many, many people and he will forever be missed.

Thank you for contacting us. We will get back to you shortly.

Please complete all required fields below.